We stepped off the plane, surrounded by the sounds of French and Arabic airport chatter.  The mister and I sticking out like sore thumbs–Peder, 6’4, blue-eyed and German-looking, and fair-skinned me in my very American clothing.  Without a word of Arabic between us, and hardly a word of French between us, we made it through customs and were greeted with a reassuring “Hey Guys!”. We spotted Karissa, looking well-traveled, and completely comfortable in her surroundings.  Following her like two deer in headlights to the snack shop, we watched her chat candidly in French with the workers to buy us three bottles of water.  I felt way out of my comfort zone, and tried to blend in.  Will people accept us here?  This is a Muslim country.  Do they hate Americans, like the news leads me to believe?  In the middle of my musings, one of the shop workers exclaimed, “You’re American?  We love Americans!  Welcome to Morocco!” 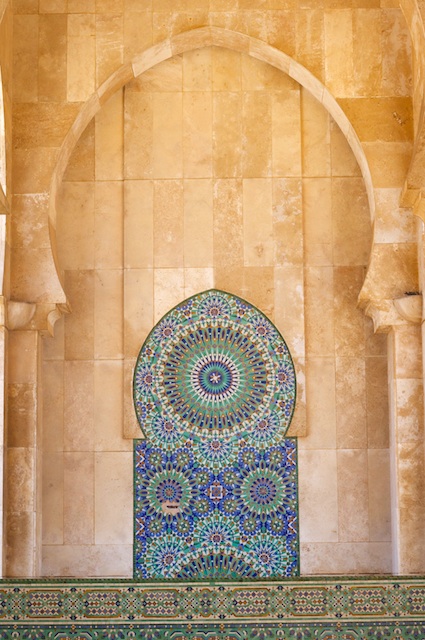 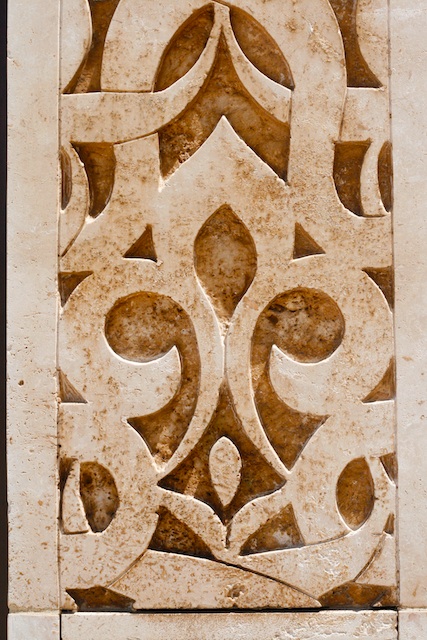 After making our way out of the airport, Karissa immediately started bargaining in French with a taxi driver to settle on a fare.  Being a passenger in a Moroccan taxi is an experience that one never forgets.  It’s the first initiation into Morocco that every traveler must endure.  Drivers squeeze cars, motorbikes and donkey carts into every available slot, and shuffle themselves around like decks of cards.  Lane lines are suggestions, and honking is used as a form of communication as if to say, “I’m here, don’t hit me!.”  Ever played the game Frogger?  Then you know how to cross a five lane Moroccan street.

We rode past fruit carts and run down buildings, flowering bushes and dirty sidewalks, simultaneously taking in the scene around us, and chatting away with Karissa, trying to catch up for the past year she had been abroad, teaching at Casablanca American School.  Next, the interrogation.  The Mister and I fired off questions in rapid succession.  How do we blend in?  You won’t.  You’re going to stick out.  You just are, and that’s okay!  What about eye contact?  I made eye contact with a man at the airport, and he looked very surprised.  How very forward of you, Karissa laughed. Women don’t make eye contact with men.  It is okay for women to make eye contact with other women.  We learned to say “thank you” in Arabic as we exited the taxi, and Karissa began to argue with the taxi driver who insisted that she should give him a big tip because of his nice big car.  From what I gathered, Karissa told him “I am not a tourist, I live here, I don’t have to pay you a tip!”  Karissa gave the driver a smaller tip than he had asked for.  He gave her his business card and said, “Next time you need a driver, you call me, and you can give me a bigger tip!”

A little later, our other good friend Tom joined us, and we set out to eat dinner.  The four of us walked down dirty sidewalks and past flowering bushes, gritty stucco walls, and children laughing and playing soccer outside five story buildings.  We stepped through a keyhole-shaped door and into the restaurant, a pristine tiled courtyard garden, complete with a fountain and a traditional Moroccan band filling the space with beats I had never learned in any of my music education courses.  I thought I’d gone to heaven when the waiter brought us a basket of squat round seeded breads and two bowls full of olives, and reached a state of enlightenment when I had my first taste of chicken tagine with olives and preserved lemons.

At dusk, we walked along the beach outside the largest mosque in Morocco, the Hassan II.  It was brilliantly lit against the electric blue sky.  I didn’t know what to expect, and wondered if we were intruding on a sacred space that didn’t belong to us. When we reached the front of the mosque, we saw families and friends out for evening walks, dressed in traditional djellaba and hijab.  Children ran and played on the shining marble steps, and birds weaved in and out of the ornate arches.  Women held hands with women, men with men, and I sensed a deep kinship as they socialized and chatted.  The mosque exuded peace, and was a refuge from the speeding motorbikes and honking taxis.  We were met with curiosity and acceptance, as evening strollers glanced at our very different appearance.  I knew then and there that I wanted to step outside my comfort zone, in order to experience Morocco fully. 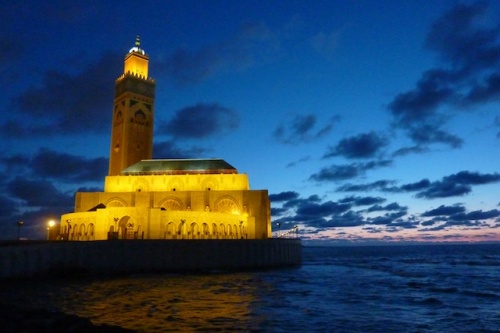 Join me next time as we eat as the Moroccans eat, cook as the Moroccans cook, and do as the Moroccans do.  We’ll walk through medinas and markets, meet new friends, and learn another recipe from Fatima, a kind Moroccan woman I had the privilege of cooking with.  The first recipe I’ll be sharing with you, is for a warm eggplant and tomato spread/salad called Zaalook.  Just as with most recipes, every home cook has his or her own version.  Here is Fatima’s, as illustrated below.

Eggplant and tomato, fresh from the underground market

Fatima quickly peels the tomatoes and trims the eggplant,

and dices it, with her crazy paring-knife skills.

She chops the parsley, 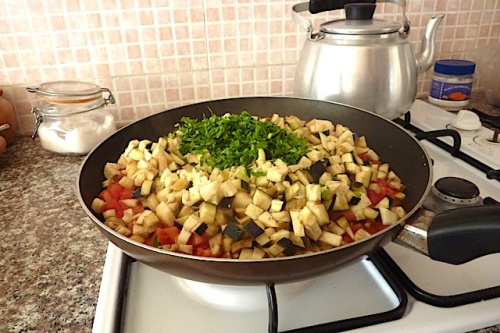 and layers everything together on the stove, finely grating the garlic overtop. 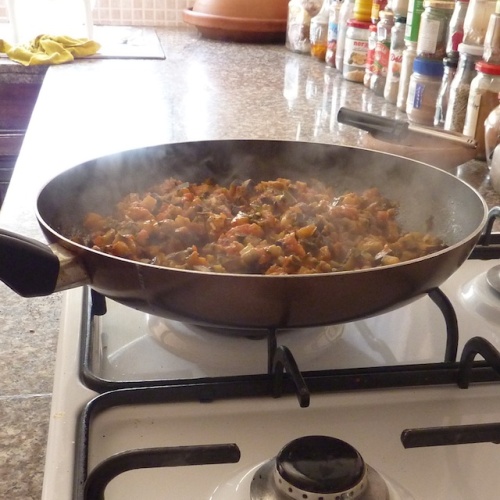 Now, the spices:  salt, paprika, harissa, and cumin seeds, which she toasts and rubs between her fingers to release the aroma.

She seasons to taste, and adds more harissa paste (to my delight).  Perfect to eat as a spread on bread, or as a salad.  Voila!  Zaalouk!

Serves 4-6 as and appetizer or small salad

Heat a large frying pan over medium heat.  Drizzle olive oil on the bottom of the pan to thinly coat.  Layer the vegetables in the pan as follows:  tomatoes, eggplant, then parsley.  Add another drizzling of oil over the vegetables.  Increase the heat to medium-high.  Cook, shaking the pan back and forth occasionally (to prevent sticking), until the tomatoes have released most of their juices.  Thinly grate the garlic over top, and stir the vegetables to combine.  Add the paprika, salt and pepper, and harissa to taste.  Rub the toasted cumin seeds between your palms to release their aroma, then add to the pan and stir.  Cover the pan, and cook over medium-high heat, stirring occasionally until the eggplant has softened and the tomatoes have almost broken down completely (The eggplant and tomato will have formed a paste with some remaining texture from the eggplant.)  Serve warm or at room temperature, alone or with bread.

*Harissa is a spicy Moroccan chile paste, which can be found in some Middle Eastern markets and specialty stores.  If you can’t find it, chile-garlic paste (sambal oelek), cayenne powder, or crushed red pepper would make decent substitutions.

Filed under Appetizers, Salads, Side Dishes